The idea was that after the hard 145 mile day yesterday, the 97 mile day would feel like a rest. It was not.

The day started as usual, early and cool. And, with a lot of up and down on a narrow country road without shoulders. Thank goodness there was little traffic. Interestingly, there were seven one lane bridges along the way, which gives you an idea how lightly traveled it was. That was the story for all but the last 25 miles. The road was not very smooth, but not too bad.

The bad part was that here they do not make any cuts in the hills to reduce the grade, they just pave over them, and some of the grades were STEEP. And, the winds started in their faces and increased throughout the day. This photo shows wind speeds over 20 miles an hour, and it was never any help all day. 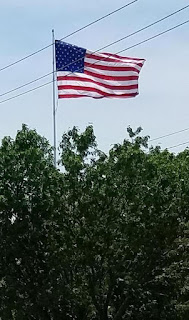 We were planning on crossing the Mississippi River by way of a ferry, as listed on the 2007 cue sheet. Well, I went ahead of the guys only to find out there was a ferry no more. I got alternate directions, which took them down a freeway (Hwy 61) for about 15 miles south, then turned east on Hwy. 24 to cross the river on the bridge. The road turned into Maine Street which led directly to our motel, so at least the detour did not result in very confusing changes to the route to our motel.

Summary: Just plain another hard day. Despite their worn out state, these guys are good troupers, with good attitudes nonetheless.

Tomorrow morning at 6:00, there are thunderstorms forecast, with 13 mph southerly winds, not too bad a direction for traveling east. It is supposed to get up to 87 degrees in Springfield in the afternoon, so it looks like the 107 miles tomorrow will not be a piece of cake either. I usually look ahead to see if there are motels within a reasonable distance after the stop planned on the cue sheet, but after the past two days, I have not bothered to do so. The guys don't need anything extra at this point.