Cycling from Los Angeles to Boston - In the Beginning

April 17, 2018
"Hey, Rick. This is Phil Anderson, your roommate on the 2016 Fast America South ride across the country from LA to Savannah, Georgia. Are you up for an adventure?"

That's how it all started for me in December, 2017. Phil was planning a ride from Costa Mesa (south of Los Angeles - but who ever heard of Costa Mesa?) to Boston, following the America by Bicycle route called "Fast America North", about 3400 miles. Three other elite riders will ride with him all or part of the way, and they need someone to drive a support vehicle while they ride up to 120-150 miles per day. I could ride some by parking the vehicle ahead, riding back to meet them and then riding back to the vehicle. Would I be interested?. 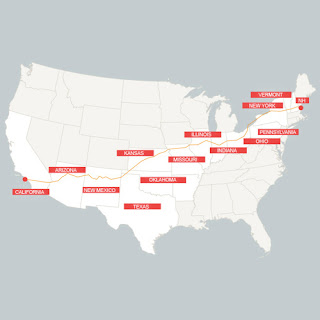 Photo courtesy of America by Bicycle

Well, at the time I did not have anything else planned, so it sounded intriguing. Then I thought that I could combine this with hiking in and out of the Grand Canyon, one of the many adventures on my bucket list. I checked with my wife, Linda, and OK, I am in. I have a class I need to prepare to teach in September and October at LCC International University in Klaipeda, Lithuania, but will work in some study time enroute.

The team consists of:

The ride would start on Saturday, April 21 from Costa Mesa.

Meanwhile, I flew to Las Vegas to hike into the Grand Canyon on Tuesday, April 17. After spending the night in Henderson, I drove to the canyon to check things out for my hike on the 19th. The National Park ranger tried hard to discourage me from attempting to hike in and out in one day. Nonetheless, I hiked along the Rim Trail to see where the trailhead was and where I could park early the next day. Then, I drove an hour back to Williams to spend the night. 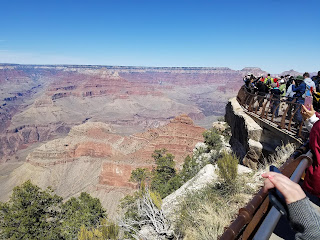 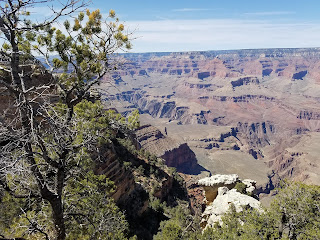 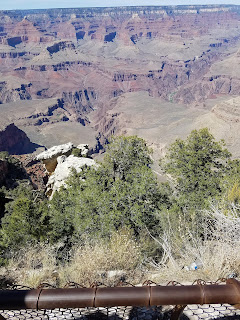 Views from the top
On Thursday, the 19th, I was up at 4:00 to make the drive back to the canyon. The car thermometer registered 31 degrees (compared with 34 degrees the previous afternoon). I reached the canyon at 5:22 a.m and hiked a mile from the Pipe Creek Vista along the Rim Trail to the South Kaibab Trail trailhead, elevation 7200'. Then 7 miles down the South Kaibab Trail losing 4700 feet in just less than five hours. That downhill was hard on the legs. There were a few other hikers, perhaps 20 seen in this stretch, so not overcrowded, despite no open parking spots in the parking lots the day before. 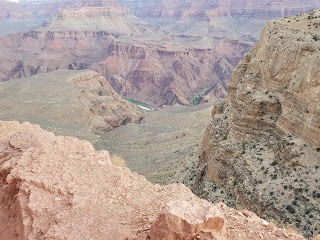 Halfway down - first view of the Colorado River below 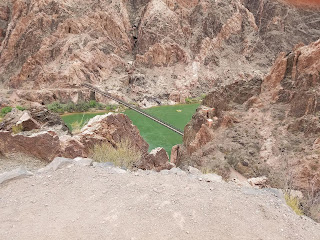 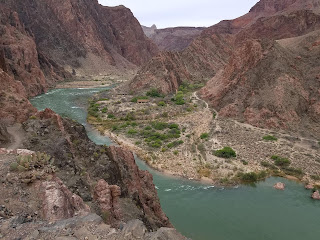 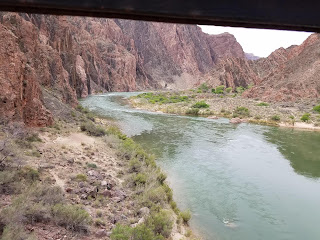 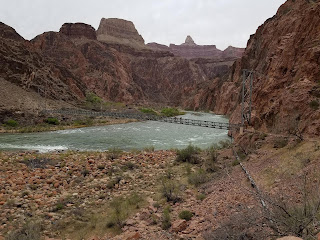 After crossing the Black Bridge, I got to the north side of the Colorado River, where the trail intersected the Bright Angel Trail, elevation 2500'. It was getting warmer, probably the 79 degrees I had been told to expect at the bottom. Drinking water was available, so I would not have had to carry 4 full liter water bottles down the trail.

The first mile and a half was then up and down to the River Resthouse, gaining no elevation.  The trail started up, rising to 3800' by Indian Garden, where again there was drinking water. Only 4.5 miles to go! But, 3000' of climbing. I slogged along, pressure breathing to keep my muscles oxygenated, slow and steady. Shortly after Indian Garden, a huge gust of wind blew dust all around, and  sneezed, then blew my nose, only to start a bad nose bleed. Before I could get my nose stuffed with toilet paper, I had blood all over my pack, my shirt and elsewhere. I must have been a sight, as I walked with the bloody plug sticking out of my nose and looking like I got the bad end of a fist fight. And with me pressure breathing intentionally and being OLD, other hikers must have thought I was in trouble, but I never had a doubt I would make it.

The uphill was tiring, but my legs tolerated it much better than the downhill, as my quadriceps trained from cycling could be better used. I finally made it to the top at the Bright Angel Trail trailhead around 6:00 p.m., almost 13 hours after I began the day, having gained back 4300'. From there, I took the park shuttle bus back to my car. I was wasted, and shaking a bit while I rode the shuttle.

I can see why the Park Service does not recommend people trying this in one day. I am in shape, and trained a lot to be ready for this - spinning, doing the elliptical and walking 5 miles with a 40 pound pack. Many people think they are in shape, but would not be ready for this, and would get themselves in trouble, as the sign there says, "Going down is optional, going up in mandatory." I can just imagine how miserable the hike would be in the summer, because if the bottom is 79 degrees when the top is 34 degrees, can you imagine how hot it would be in the canyon when the top is 80? The rocks would radiate the heat making the felt heat even higher than the air temperature, and you could get cooked alive. 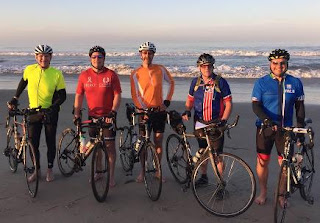 The guys left the hotel around 6:30, and left the beach around 7:00 in gorgeous 70 degree temperature and bright blue skies. It was  a long day in the saddle for the guys (about 11 hours, including the breaks), but all felt it was a great day. Some said it was "the best first day ever!" The winds were not a major factor,in contrast to the first day in 2016. It got around 84 degrees before long, and hit 94 from Beaumont to Palm Springs.

After a short ride from our hotel to the ocean where the traditional wheel dip is done (but skipped this morning), the first few miles were out the Santa Anna River Trail to get out of the main part of town. They were on the Santa Ana River Trail a lot, which was nice being away from the cars. We had a SAG stop at about 32 miles in Corona. 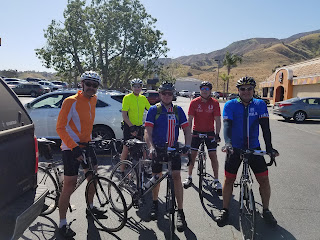 At the first SAG ("Support and Gear")

When off the trails, they rode mostly in urban traffic with bike lanes till they were able to intercept a couple more paths before lunch at McDonalds near the Walmart on Barton Road in Loma Linda at about 68 miles. After lunch, they rode a steady 20 mile climb up the San Timoteo Road to Beaumont, had a quick cooling off SAG there, before descending the 30 miles or so into Palm Springs. Everyone was a bit tired, as can be expected with the heat, but in great shape to tackle the days to come.

It was also a good day mechanically, with only two flats: Vern before the first SAG and Jerry after Beaumont. The test will be along the freeways in the days ahead with the wires from steel belted radial tires lying along the shoulders of the road.

So, the first 118 miles are in the books, with something over 2000' of climb, but only a net 22' change in elevation from coast to the hotel. Tomorrow the plan is for 133 miles with a stiff climb up Box Canyon to spend the night in Blythe. But, you will get the details of that in tomorrow's post.