Cyclist Physics: What Goes Down, Must Go Up

They had a stiff climb to Yarnell Pass to reach the elevation of 4850'. Vern had his gears skipping so that he could not use his lowest two gears coming up the hill, so that made it all the more difficult. After a quick impromptu SAG at the top, they had a wonderful ride down to Peoples Valley, then Skull Valley and then the road turned up again. It is demoralizing as the road looks flat, but your legs tell you different. I recall this slope looking flat in 2016 wearing me out. We had a SAG at mile 42.7 at a store in Wilhoit. Jerry was the last to arrive, suffering from intestinal pain and just not feeling well at all. He decided he needed to ride in the truck for awhile. If anyone has the idea that this ride is easy, forget that idea. 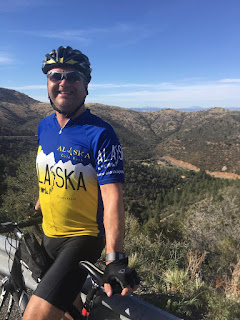 From there, they rode to Prescott, where Vern was able to get his bike taken care of. No big issue, thankfully. We had a quick stop at a bike shop, then pressed on to a SAG at mile 72.3 at Roberts Marketplace at exit 323 on Hwy 89A. Then came the challenge to the Mt. Mingus summit at 7023'. The grade was very steep in places as the road snaked up the hill. 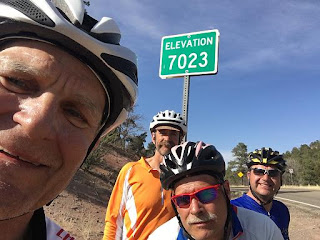 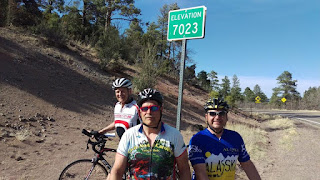 Then came the screaming technical 10 mile descent down a red canyon into Cottonwood, along a twisty, turny two lane road with traffic. I was glad to be driving the truck, as I just do not feel comfortable on fast descents, particularly when I cannot see the runout at the bottom. We stopped in Jerome (a touristy town with its buildings glued to the side of the mountain) part way down, to enjoy a meal at the Haunted Hamburger restaurant.  Jerry recovered enough to ride the rest of the way in Cottonwood. 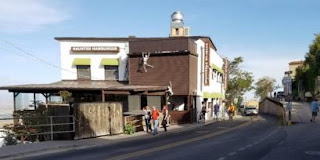 A very popular restaurant. People are just dying to get in there. 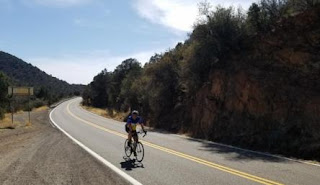 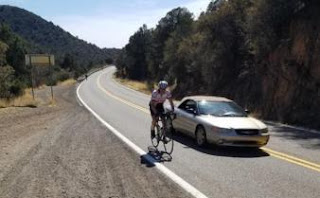 The heat was not as much a factor today: 78 degrees at 8:40 and never got over 84. What winds we had were mostly favorable, so big issue today was the 8697' of climbing at higher elevation than the guys are accustomed to. So, four hard days down. Tomorrow will see a stiff but shorter climb, then a long ride along I 40 to Winslow.