The guys got an early start again, and rode through the city of Santa Fe to get on Hwy. 25, and then started climbing. 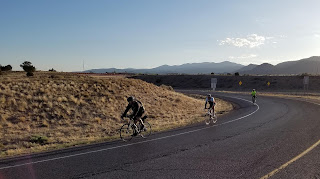 Guys on the entry ramp to the freeway
I started soon after and went on past them, only to see that there was a stretch of freeway that went into a deep valley with guardrails about 30 inches away from the white line, and half of that 30 inches taken up by rumble strips. I sped to the next exit to double back to catch the guys to have them get off at Exit 290 (on the ABB cue sheet but we had thought we could disregard that instruction). They safely made the four mile detour and journeyed on along the freeway until Exit 339.

We did an impromptu SAG on the side of the freeway about 30 miles in and another about 45 miles. 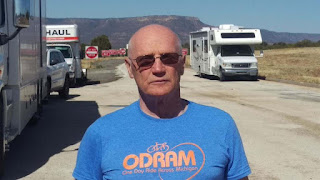 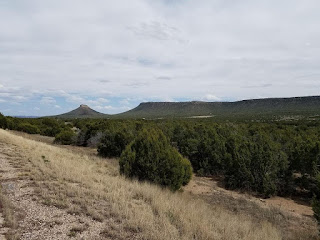 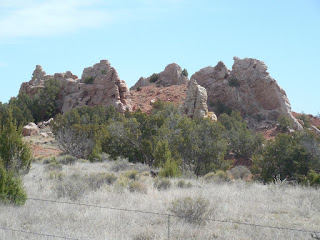 Views along the way

There had been quite a bit of climbing by then, but in temperatures that started in the high 40's, then into the mid 60's by mid-morning, so great for riding in virtually no wind. Then the guys had a wonderful time taking it easy, except for Vern who just blasted the route today. Everyone was in Las Vegas by noon. We went to lunch before getting into the motel. 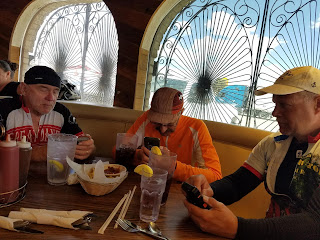 The rest of the day was spent in the pool, relaxing, going to KFC for dinner, and to bed early.

We had virtually no wind until we reached Las Vegas, then the wind began whistling, 21 mph with 35 mile gusts. I had intended to pull my bike out of the back of the truck, but declined to go for a ride in that wind.  The wind tomorrow is forecast to be very similar, but is expected to either be a cross wind, or perhaps even in the 4:00 or 5:00 position. But, winds are fickle, so we are hoping for the best.

We have 108 miles to go tomorrow to Tucumcari, New Mexico with 3157 feet of climbing and 5876 feet down, all starting at about 6286' elevation. So, not a humongous day, but not a piece of cake either. The guys are charged and ready to go. The two relatively easy 70 mile days have been good for them to recharge their batteries.