It was only 42 degrees when we woke up at 5:25, and maybe only a couple of degrees warmer when the guys started out at 6:15. by 7:00, it was up to 50 degrees and did not hit 70 until 10:22. The result was very favorable riding temperatures, compared with the heat of the first few days. The winds were absent as well for at least the first 47 miles, and then generally favorable until the last 10 miles into Tucumcari. 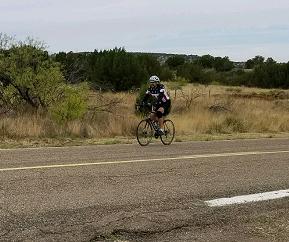 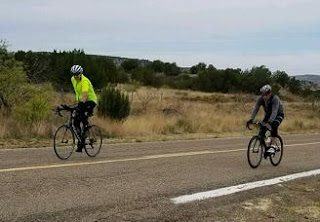 The guys around mile 15
The route today was entirely on Route 104, a lonesome highway with little traffic, and only one store/post office the entire way, at mile 76 in the "town" of Conchas. The route early on was a lot of ups and downs, including one long, straight stretch down with very smooth new pavement where everyone topped 40 mph. 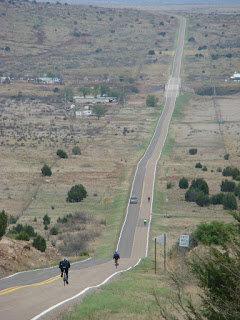 Whee!
They topped out about 1000 feet higher than where they started at the top of the Las Vegas Plateau at about mile 38, when we came upon a sign that said, “curvy roads, next 3 miles” (or something to that defect) and then a sign picturing a truck going downhill and 9%. Hmm, steep, curvy road ahead. The guys took it a lot easier down this stretch than the straight downhill they had raced down earlier. 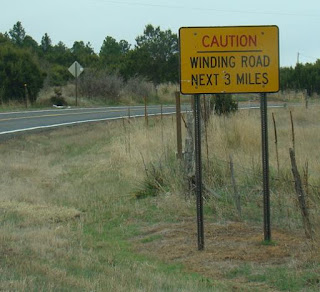 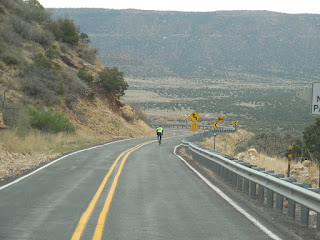 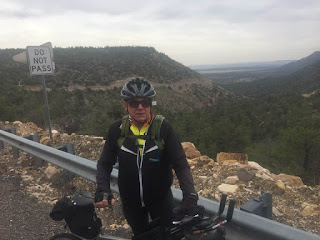 The route had a nice little steep climb about mile 66, then mostly a lot of up and down into Tucumcari. Ken was the first to arrive at the Days Inn motel, having pushed it for about 30 miles before backing off the last 10 miles. Vern arrived a bit later, riding strongly all day as usual. Jerry and Phil arrived last, having done a little tour of the town before coming to the hotel. By this time, the wind had picked up to perhaps 20 mph. Hmm, what will tomorrow bring?

Beautiful red rock formations along the last 30 miles to Tucumcari
The guys are VERY optimistic about tomorrow. The hotel says breakfast starts at 5:00. Sunrise is to be 6:04. The route tomorrow looks like a relatively easy day, again with a lot of small ups and downs, with the highest we will be within 500 feet of the lowest we will be. The weather forecast is for stiff tailwinds from the SW (perhaps as high as 25 mph, with gusts of 40!), with us going directly NE all day long on Hwy. 54. Here are the scheduled next two days' routes:
We are not making any motel reservations in Dalhart, but will play it by ear. If the winds are as forecast, the guys want to push past Dalhart onto Day 11's route, and see if they can reach Liberal. The town of Guymon, Oklahoma is 70 miles into the Day 11 route, so that is a fall back position if they don't make it to Liberal. With a 5:15-5:30 start in the pre-dawn light, and a tailwind, they could easily be in Delhart well before noon. Let's see what happens. Stay tuned! 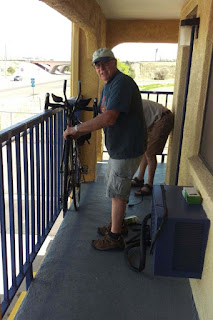 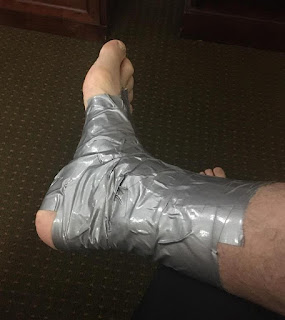 As for me, I finished the second of four books I need to read on this trip to get ready to teach at LCC International University in Lithuania in September. After a slow start in the early days of this trip where the guys needed close support, I have made great progress the last two days, so hoping to keep it up so I have time to ride later in the trip.