Breakfast again at 6:00 and on the road at 6:15. The road rose steadily, then continued through beautiful red rock country, through the towns of Sedona and Old Town Sedona until they reached Oak Creek Canyon. 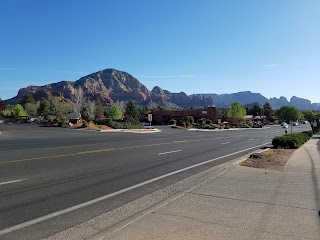 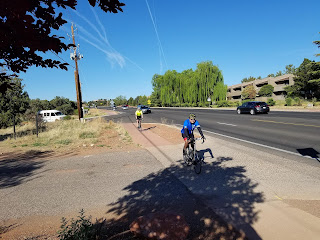 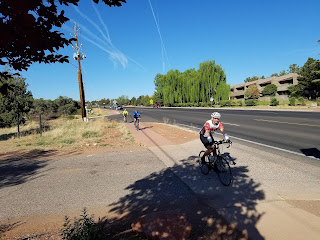 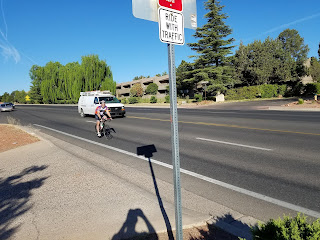 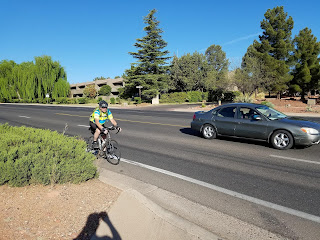 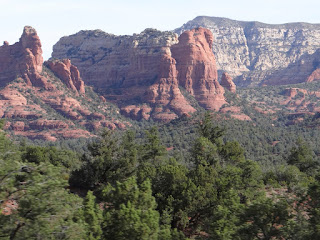 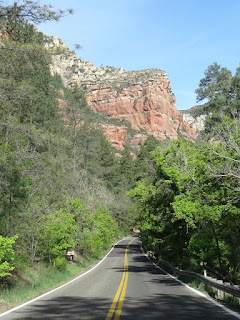 Oak Creek Canyon ... ah.......
It was only 59 degrees at 6:00 and had risen to 71 at 8:30 and back to 68 bu 11:00. I don't think it got above 76 all day, so was an excellent riding day. The ride up Oak Creek Canyon to the rest area/lookout point at the false "summit" at 6420' elevation was gorgeous, even if it was uphill. Jerry arrived first, and confidently declared, "I'm back!" The others arrived all in good shape, handling the last 2.6 miles of quite steep, winding road without difficulty. It was reassuring to see Ken fully back in stride as well, after some concern in the hot days earlier. 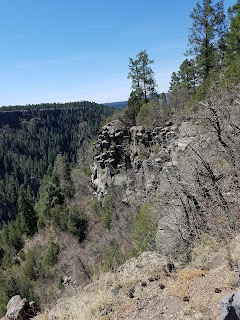 Views from the lookout point at 6420' 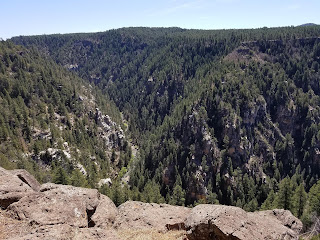 Ken reported he needed some attention to his bike, with the handle bars a bit askew from being transported in the back of the truck when he needed a ride and the rough roads had loosened the head of his stem as well. Meanwhile, Vern got another flat and needed to put his old tire back on and wanted to get some supplies at a bike shop as well. While other were eating lunch in Flagstaff at mile 47.4, Ken headed out for a bike shop 2.3 miles away. I went back about 8 miles to retrieve Vern and his bike and then took him to the bike shop as well. From the bike shop, Vern got back on his bike to try to rejoin the route on Interstate 40. Before long, I had two guys that I had no idea where they were, and not sure they knew where they were either.

Nonetheless, I got onto Hwy. 40 and headed east to  find the front three. Before long, I passed Ken, so was relieved. We continued on until Exit 233 where we got off the Interstate for a SAG at a gas station at mile 86.9. While there, we got a text from Vern and later got there a short time after most others had left.

From there, it was a fairly fast ride to Exit 253 in Winslow along Hwy 40 to the Quality Inn. There was a slight tailwind, and the road drops about 1500' to Winslow, so the pedaling was not too bad, going 19-22 mph with not much effort. Along the way, we passed the turn off to the Meteor Crater, which people have described as "a big hole in the ground" 570' deep, created about 50,000 years ago during the Pleistocene epoch. 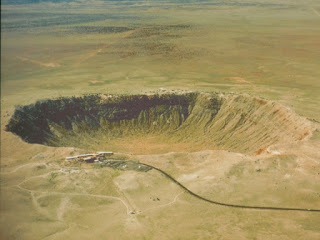 Meteor Crater
We stayed at the Quality Inn, about a mile away from the "Corner in Winslow, Arizona", so the guys did not see it, but I went for a 4 mile walk before bedtime and walked past it. I would say it is past time for Winslow to find something else to be famous for......

Everybody seems in good shape now, despite being tired from five hard days on the road. The worst problems appears to be sore derrieres.