Today was a day that did not go as planned. The riders were up and at 'em by 6:30, with a 146 mile day ahead. With that distance, the plan would be for me to ride in  some 20 mile stretches to give some of the guys a break so they would not need to ride the entire distance. I drove up to the Continental Divide at 7245' which would be the 32 mile mark for them. It was steady climb starting at about 6312' elevation so the thin air was a factor, but what was worse was about a two mile stretch of awful shoulder along Hwy. 40 and the start of a stiff headwind.

Upon arrival, Ken said, "32 miles and almost 3 hours to get here. The arithmetic for the day doesn't work." Nonetheless, we began to try to work the plan by my taking off riding, with Vern in the truck. The route was supposed to be pretty much downhill from there until a big bump just before Albuquerque, but the straight on headwind of perhaps 18-20 mph made it difficult to go about 10-11 mph. On one downhill stretch, I pulled alongside Ken and cheered, "I am going 16 miles an hour!" But it didn't last long. And, as the route turned south, the wind too turned so it was still directly in our face. Bummer!

Ken, Jerry, Eric and I slugged it out to the town of Milan (32 miles for me, about 65 miles so far for them). There, the command decision was that I would take Eric and Jerry with the truck to the motel in Albuquerque and return to pick up Phil, Ken and Vern. We learned the Phil was actually ahead of us, having thumbed a ride in a pick up 12 miles back. Actually, it technically wasn't "thumbing a ride",  because he took off his front wheel (undamaged) and held it up and pointed to it to feign a flat tire and needing help. It worked.  As we were driving to Albuquerque, I received a call from Phil with the news that he had picked up another ride after about 10-12 south of Milan, and that he was getting a ride all the way to Albuquerque, so we had one less to worry about coming back to pick up. It seemed like a long 85 miles to Albuquerque, and everyone was glad they did not have to ride it.

By the time I returned to pick up Ken and Vern in or near Old Laguna, Ken had logged 99 miles for the day, and impressive feat with the wind, and Vern about 68.

So, as you can see, the day did not go as planned. But, for me, it felt good to get out to ride, despite the wind. As for the others, they were just glad to get to the motel, each with a story to tell. These miserable days are the ones that get talked about later. 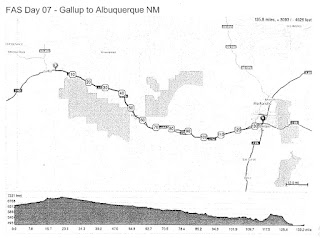 On the America by Bicycle tours across the country, this is normally a rest day. But, the guys did not just want to lay around all day, so we decided to break up the next planned day of 136 miles from Albuquerque to Las Vegas, New Mexico into 2 shorter days, by biking the 78 miles to Santa Fe today, and do the rest of the way to Las Vegas the next day. With 108 miles from Las Vegas to Tucumcari, New Mexico scheduled the day after, and nothing for hotels in between, there were few other options.
After breakfast, we bid Eric goodbye, as he was heading back home to Alaska, having successfully completed the stretch across the country he had missed in 2016.
They were riding by 6:30, and after a nice stretch through a rural residential area southeast of Albuquerque, they began to climb out of the valley. They got on the Turquoise Trail (Hwy. 14) and continued to climb, for a total of about 2000'. Then they began a series of uphill, then downhill, then uphill, then downhill. We went through the "towns" of Golden, and then reached Madrid (interesting shops in a hippy looking way after a nice fast descent into town). They guys were having fun, with comfortable temperatures mostly in the mid-60's and later mid-70's. They arrived at the Quality Inn in Santa Fe around 1:00, having had a great time. 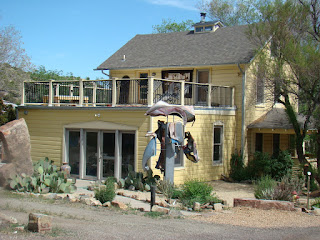 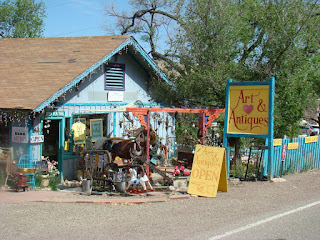 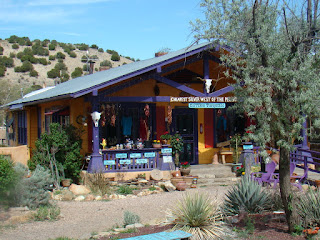 The rest of the day was spent lounging around, eating, doing laundry and just getting ready for another easy day tomorrow riding to Las Vegas. There will be a bit of a climb out of the city, then a lot of up and down, but nothing serious. Their bodies can use these shorter days to ready themselves for the longer days ahead. But, thus far a really impressive performance by the team.