The day started at 64 degrees in Blythe at 5:45.After a short ride along a freeway frontage road they got on freeway Hwy, 10 and almost right away began climbing. Then they entered Arizona, one state down, several more to go. 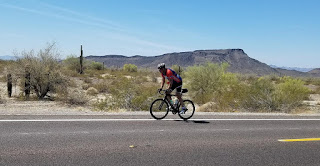 On Highway 60, we followed the two lane road on a steady uphill climb, from about 1200 feet elevation to about 2625' It never got steep, but it was a steady climb.

We had the first SAG at the Buckaroo Country Store in the town of Brenda. Brenda was pretty sleepy now, but apparently have about 1000 trailers parking around there in the winter. Shortly thereafter, we passed through the "town" of Hope - hmm, I only say two buildings, and they were closed. Anyway, the sign had been corrected, correctly this time. 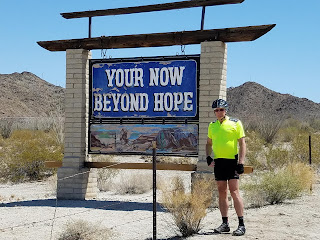 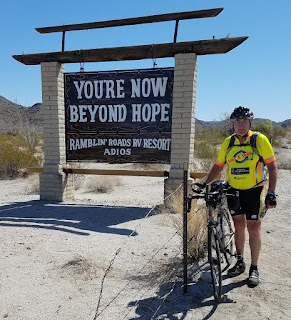 Not much here to hope for

Our second SAG was at a western restaurant in the town of Salome, The AC was a welcome treat.

Our third SAG was at a Family Dollar store on the east side of Aguila, where the guys were able to take shelter in the shade of the building, which all appreciated.

They slogged away up the gentle slope, until about mile 104, then began a good 10 mile downhill into Wickenburg.

I made an extra quick stop for the guys just before the summit after they had had another good climb, as I  anticipated they would be dry again. "Brahma Bull" Jerry cruised right by in his habitual "leader of the pack" role. He puts a lot of  young guys to shame. That is one of the reasons I agreed to support this ride - inspirational guys like Jerry.

It was actually beautiful weather, nice and sunny, with low or marginally favorable winds. It is just that cycling in temperatures over 80, and especially over 90, sure can take the starch out of you.

Day's summary: Another 115 miles done, with 3,300' of climbing. Tomorrow some steep climbing, summitting over 6000'. I hope that means cooler temperatures for the guys.