A little later start today than yesterday, at 6:30, which was first light with the time change, at a decent 54 degrees. They left with the idea of riding the 83 miles to Dodge City and seeing how they felt, and what the weather was like. From there, the decision would be made whether to push on the the next town with motel rooms available (Larned - 60 miles down the road) or to stay in Dodge City.

Well, the first 10 miles traveling NE on Hwy. 54 went by pretty well, with a little help from the wind. Then the wind changed, and the next 30 miles to the SAG stop was done at 12-14 miles an hour, in other words, work. That tired out some of the team, and the decision was made - Dodge City was far enough for today. A cold front had moved in and the temperature had dropped into the 40's.

About 20 miles later, they turned north on Hwy 283 and had the wind behind them, so the last 23 miles felt like a treat. It was shortly after noon upon arrival in Dodge City. After a quick lunch at Arby's, Vern noticed a storm was coming, so we hustled to the motel. It started raining a little before we got into the rooms, then it poured, with booming thunder and lightning. We were all glad we were not still on the the road to Larned. 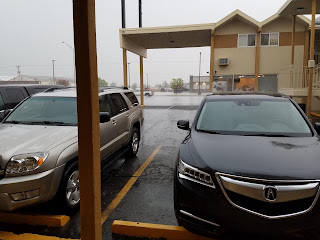 Under cover in time 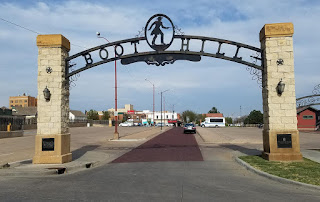 Tomorrow will be another short day, 87 miles to Great Bend, with the elevation dropping about 800' along the way. The guys need another relatively easy day, as the day after we will be back to days over 100 miles. Time to rest!