The guys headed out shortly after 5:00, with lights blinking prior to the 6:04 sunrise, to get out of town before the traffic got heavy. The breakfast in the room avoided having to wait until the 6:00 breakfast. They were quickly out of town and onto a great country road with minimal traffic. After a quick SAG stop for water at the Old Covered Bridge on Graham Road at mile 47, they were eager for a lunch, which they finally reached around the 60 mile mark south of the town of Conneaut.

From there, they headed NE along Route 5 E., all the way to Westfield, crossing the Pennsylvania border at abut the 64 mile mark and the New York border near mile 111. 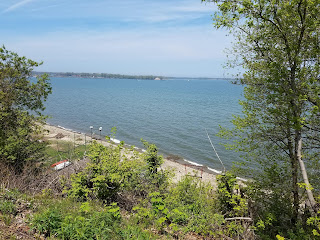 Lake Erie
We are staying at a locally owned old style motel so we could cut 20 miles off the 138 mile day on the cue sheet, but the mileage for the day still ended up being 129. The guys had wind in their faces most of the day, about 5-6 mph early, but over 10 in the afternoon. It got cold enough near the lake, that they put back on their arm warmers in Conneaut for the rest of the day.

If it had not been for fighting the wind, it would have been a beautiful day. We need to get the guys eating more early on and more often, as both either bonked or nearly so. It was a tougher day than expected.

Tomorrow we move on to Batavia, New York, about 105 miles down the road.