These were two relatively easy days.

Day 11 (Thursday) was great with tail winds pushing them along, except for about 10 miles early on. That headwind was the opposite from what the weather forecast said. Nonetheless, the rest of the day was great with the guys were really enjoying the ride. There was about a 1000' feet of elevation loss during the day, and temperature were comfortable.

On Day 12 (Friday), we took an alternate route from that on the ABB cue sheet. We looked at the forecast winds, and thought the last 70 of the 129 miles planned would be right into the teeth of a headwind. There appeared to be an alternate route that was actually shorter, but with unknown road smoothness, shoulders and traffic amount. But, it appeared that the alternate route would avoid the headwinds, taking the winds at the 9:00 or 10:00 position. So, the decision was to go for it.

It turned out that the roads were smooth, the shoulders 41 miles on Hwy. 56 and 156 wide, and traffic tolerable. Then they turned east in Hwy 140 and the first 15 miles were a gorgeous scenic route with rolling hills,with smooth pavement and almost no traffic, then flattened out as they neared Salina. The route included about 5-6 miles of urban traffic. A sales person in a bike shop recommended a different route to Abilene along Country Club Drive, which was also a delightful ride, then north on Hwy. 15 to the motel. 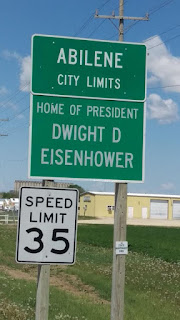 The weather forecast was wrong again, in that thankfully the winds were not a factor whatsoever. The guys again had a delightful time.

Again there was about a 1000' drop in elevation and comfortable temperatures.

Tomorrow looks like another pretty easy day, with 109 miles, not much elevation change and favorable winds. Stay tuned.

Tomorrow will be the last day Vern will be with us, so our group will be getting smaller.